!!The Most Shocking River Scam Ever!!

Do you know that Yamuna River disappears after Hathani Kund Barrage in Haryana?

97% water of Yamuna river is sucked in by canals just before Hathani Kund barrage. Rest evaporates after running few kilometers. Around 150 kilometers of Yamuna bed is completely empty.

What flows in Delhi and after that is nothing BUT untreated filthy dirty drain water from various drains dumped into Yamuna bed.

Following is the pictorial explanation of the situation. This scam can even be witnessed and substantiated by Google Maps.

Please use the slider controls at the bottom of the slide show to move back and forth. 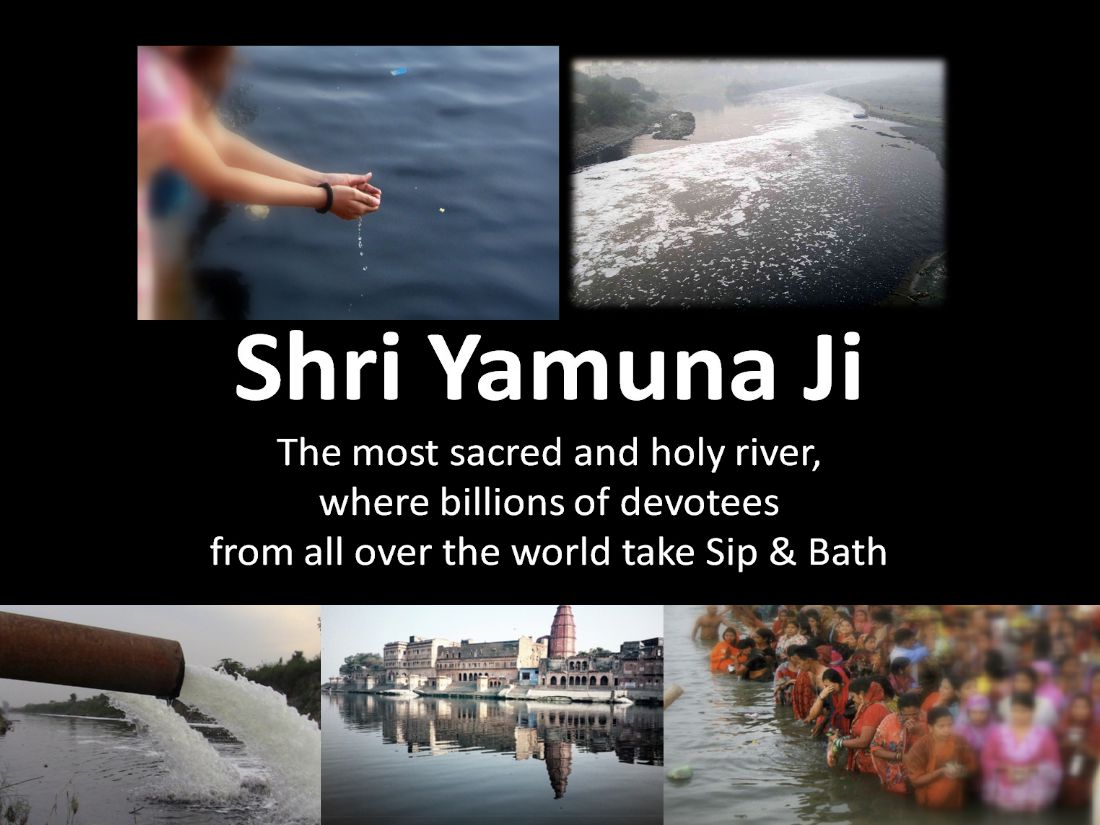 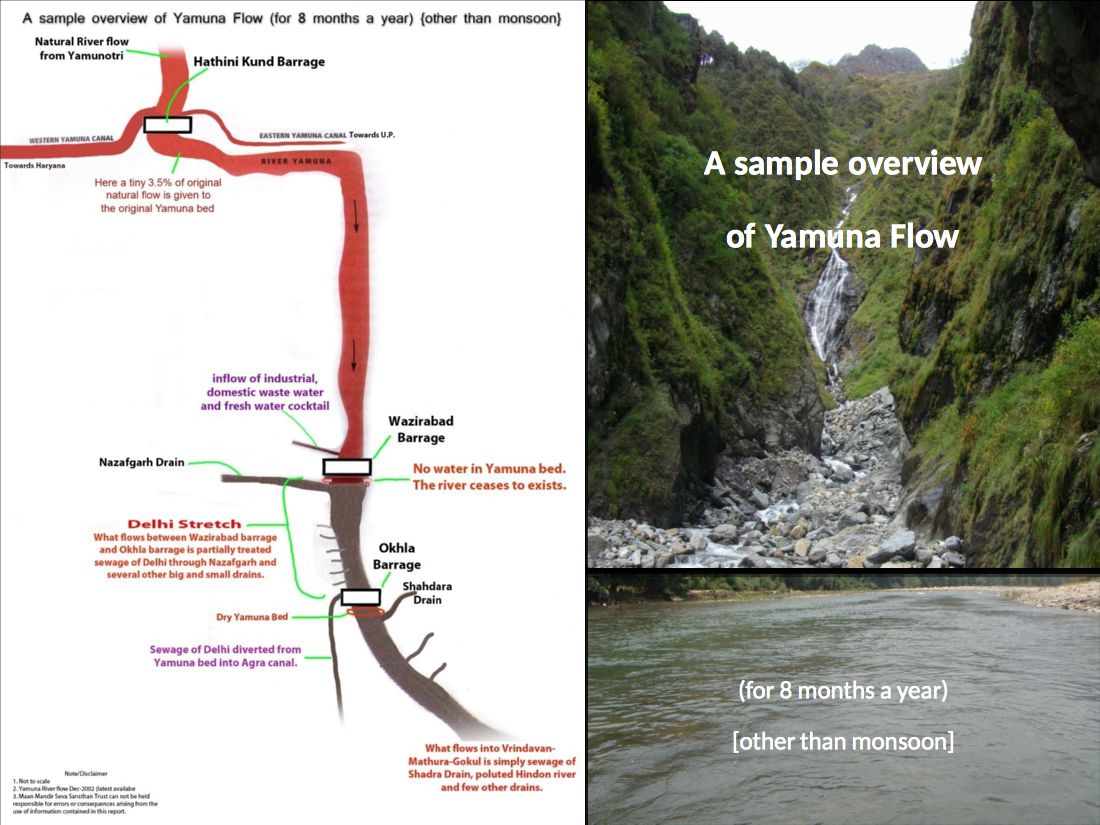 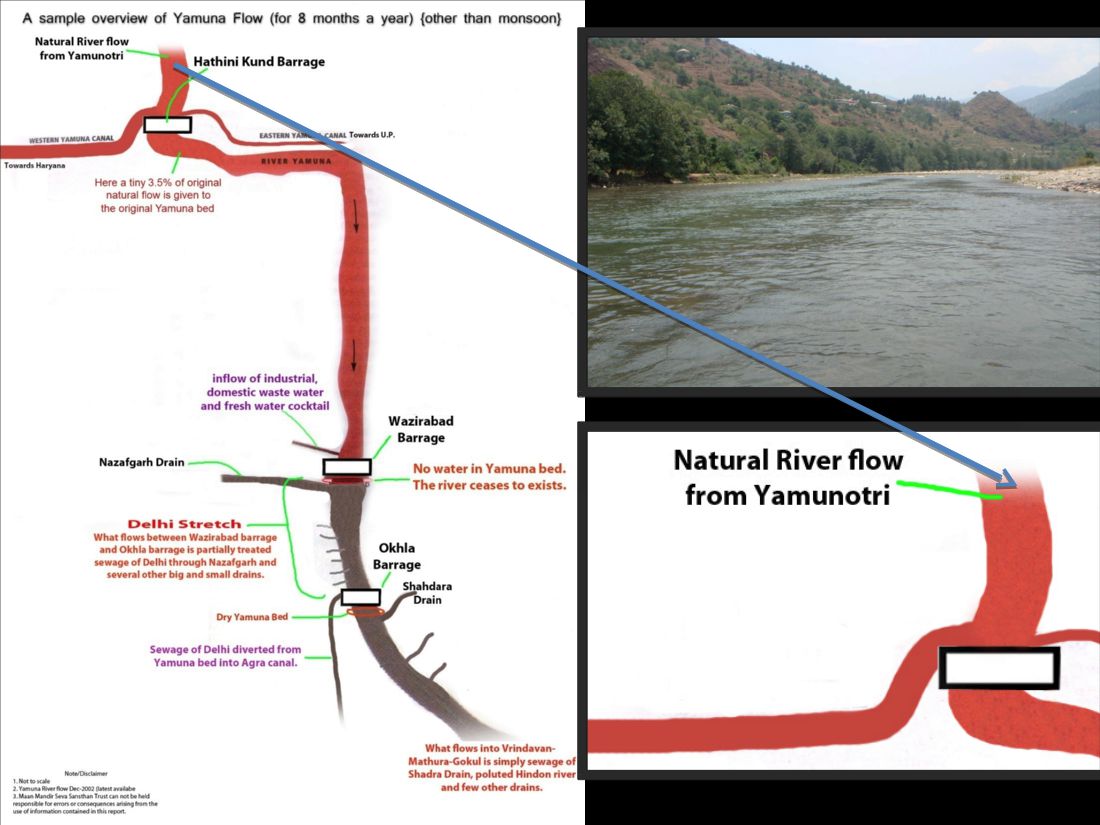 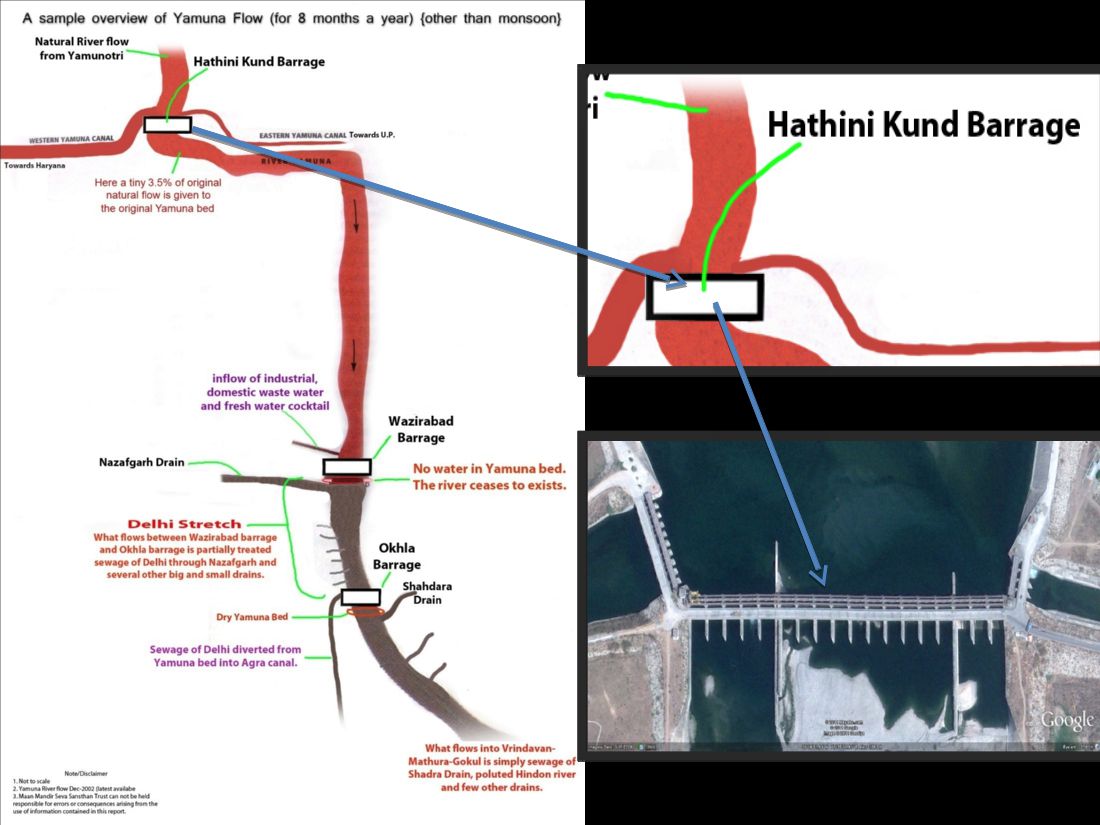 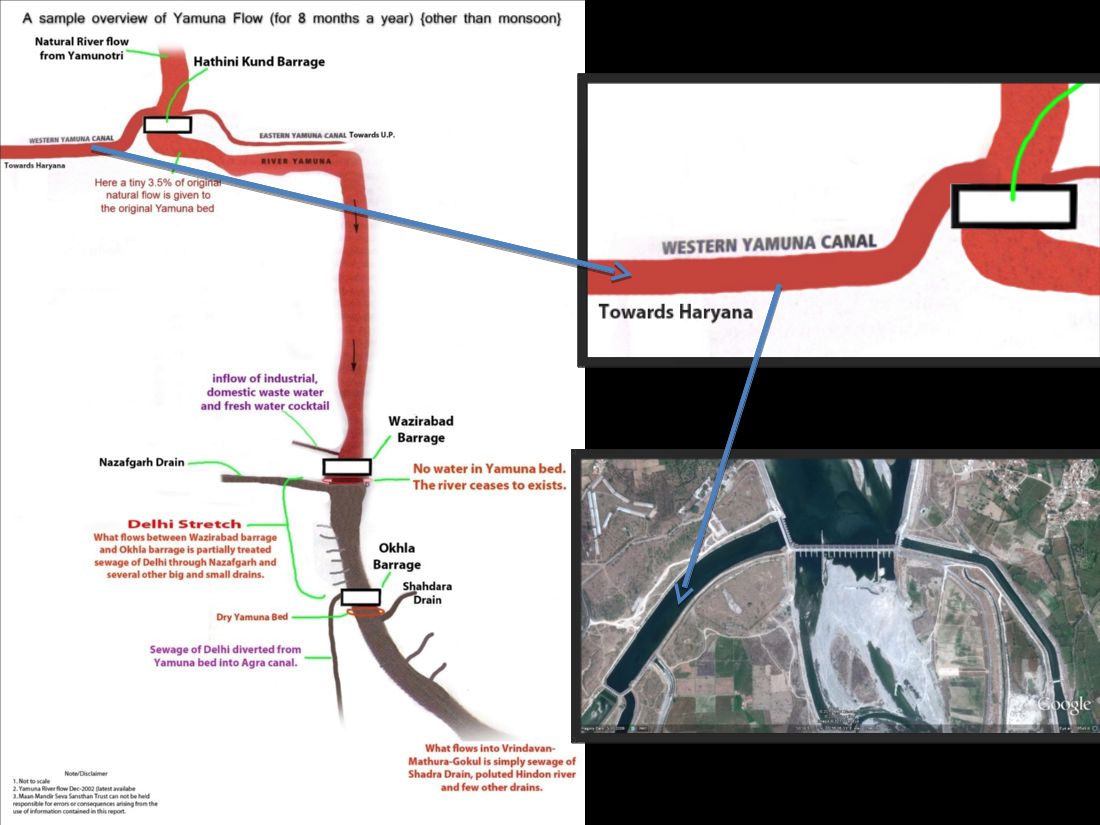 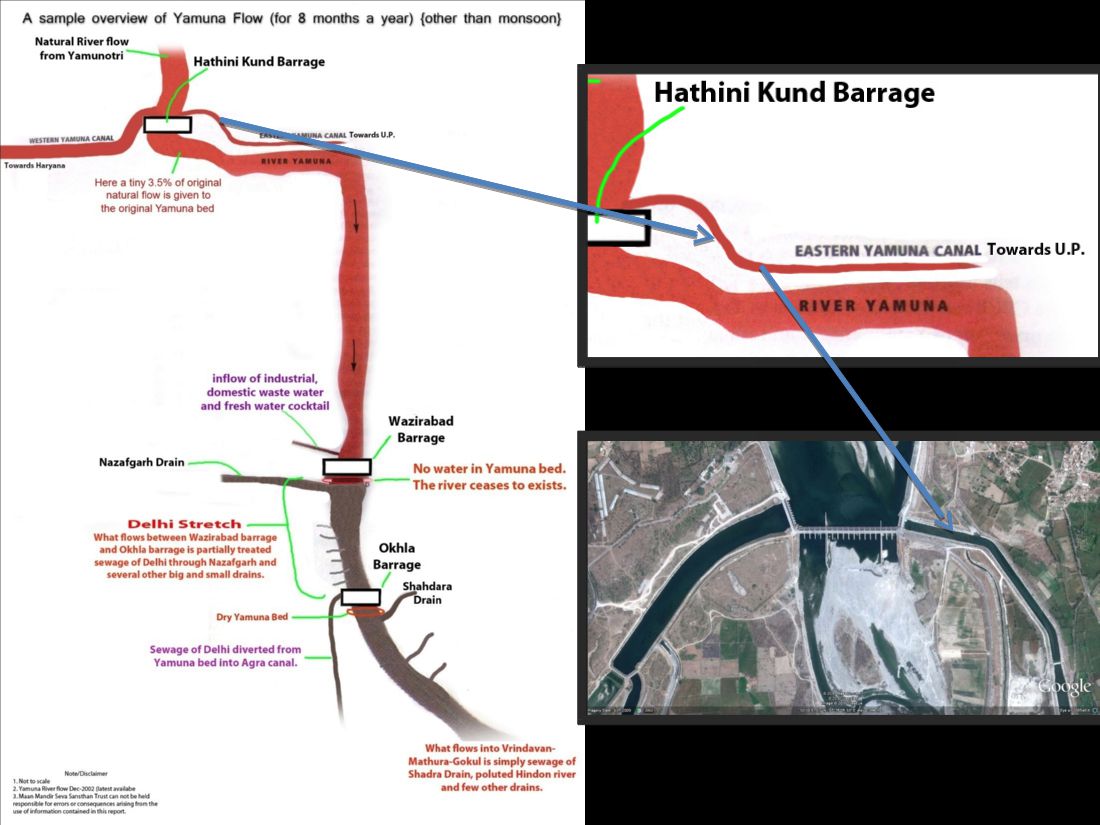 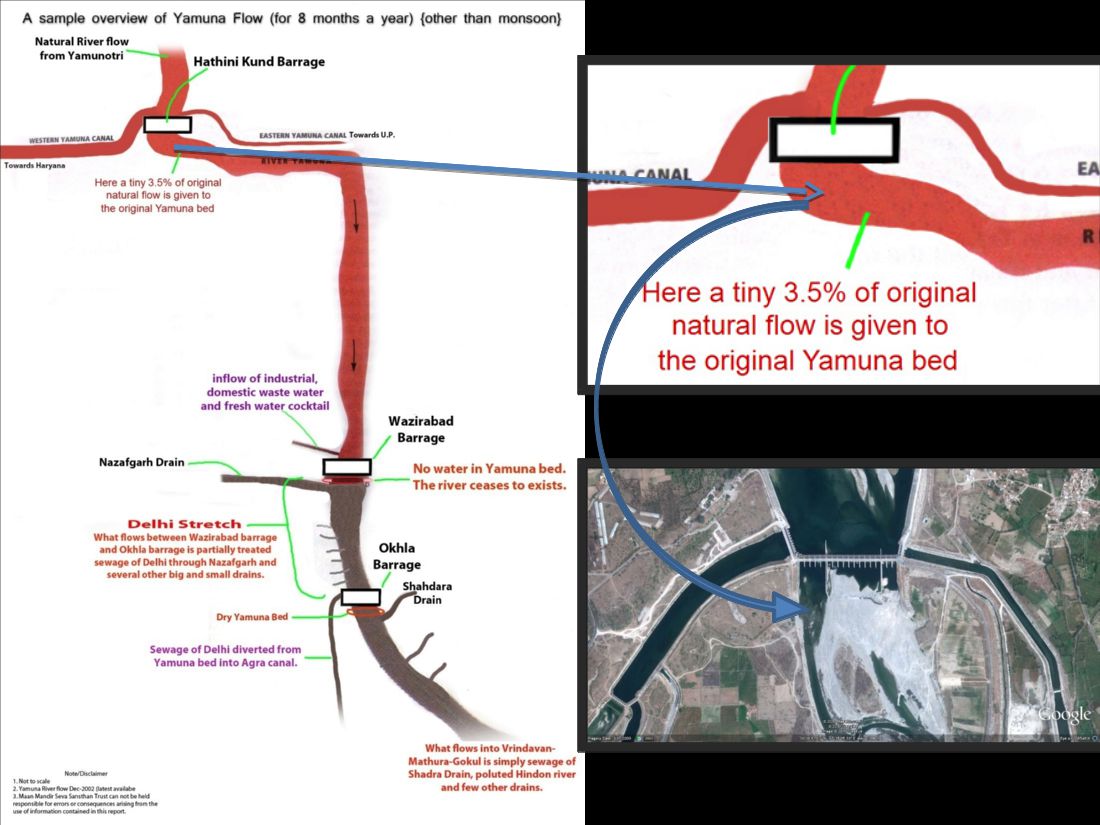 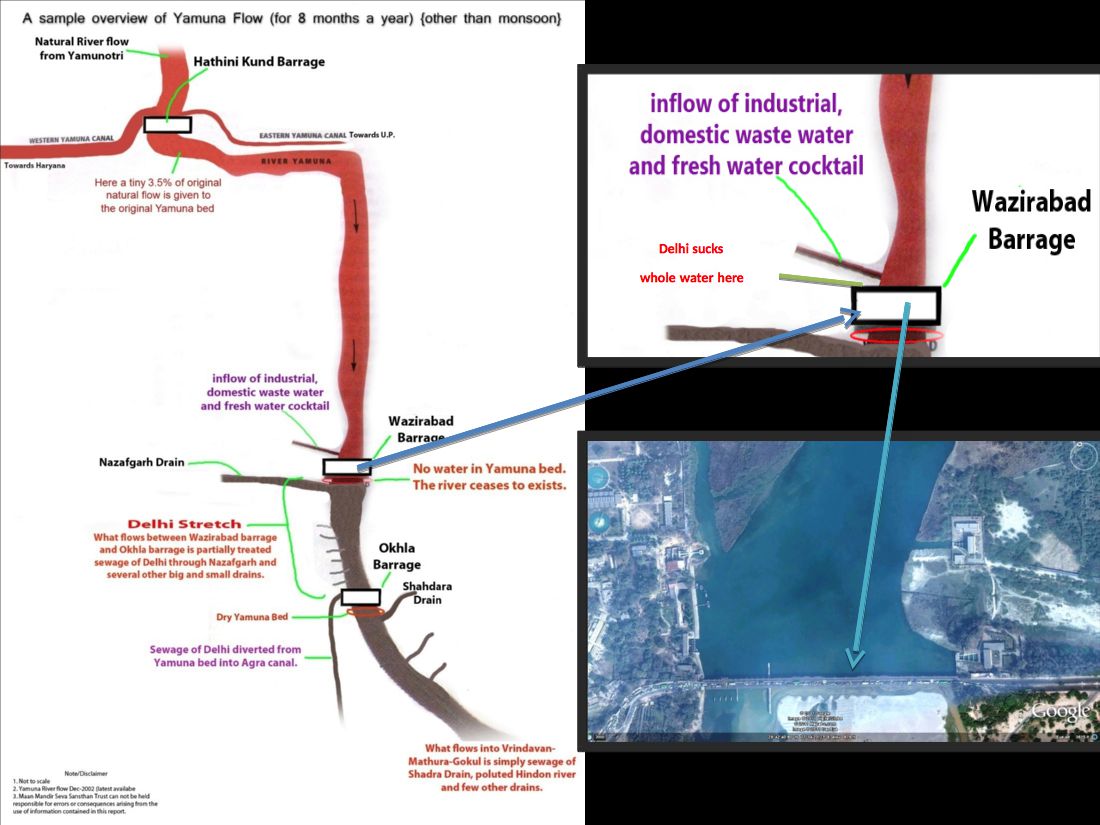 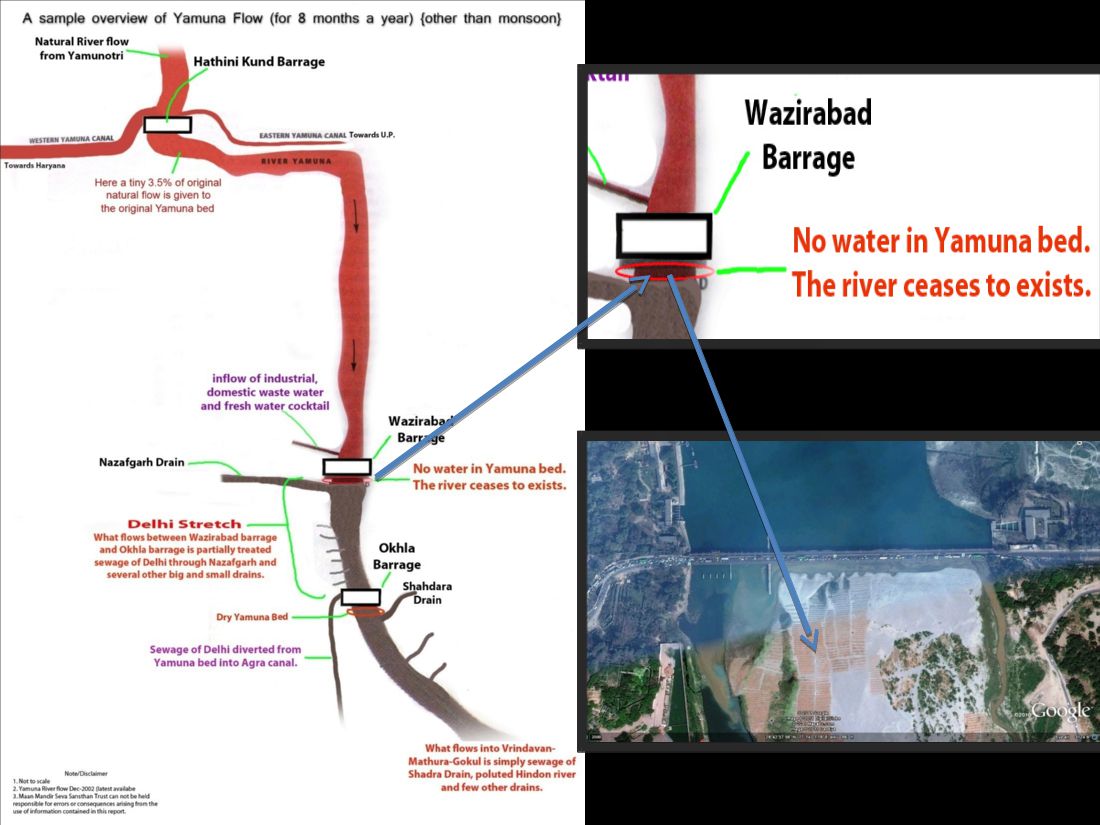 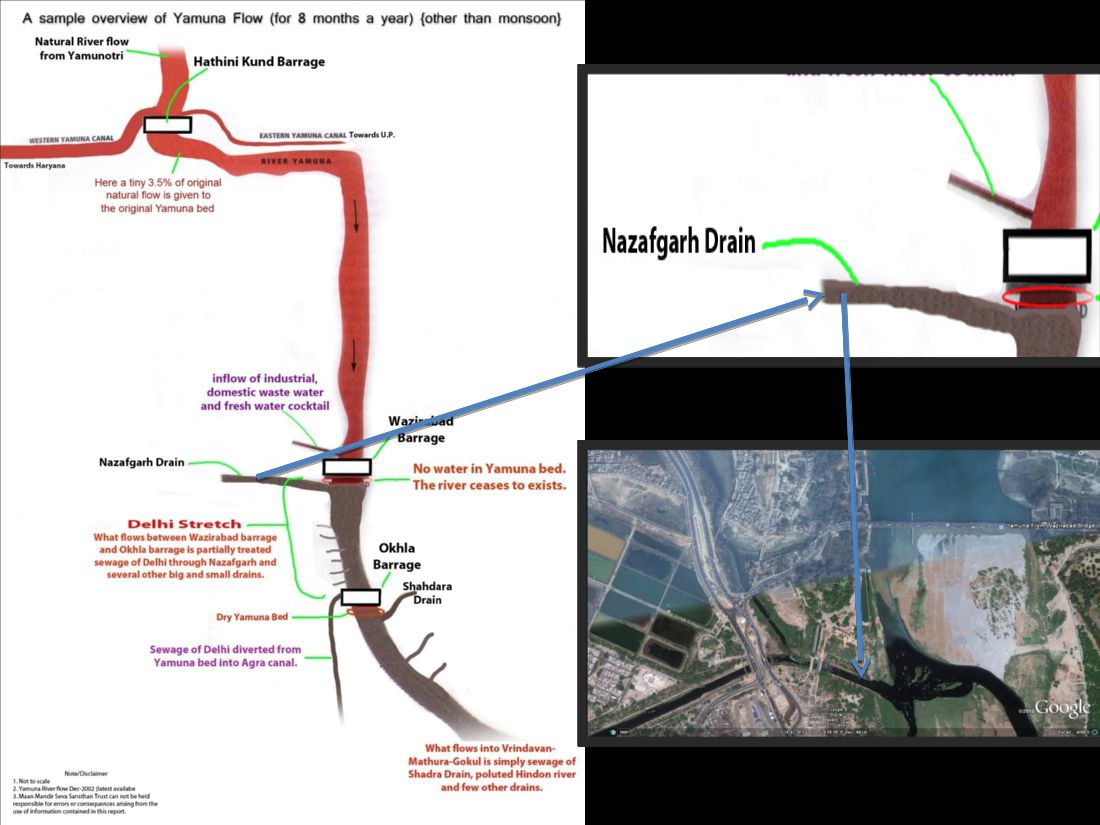 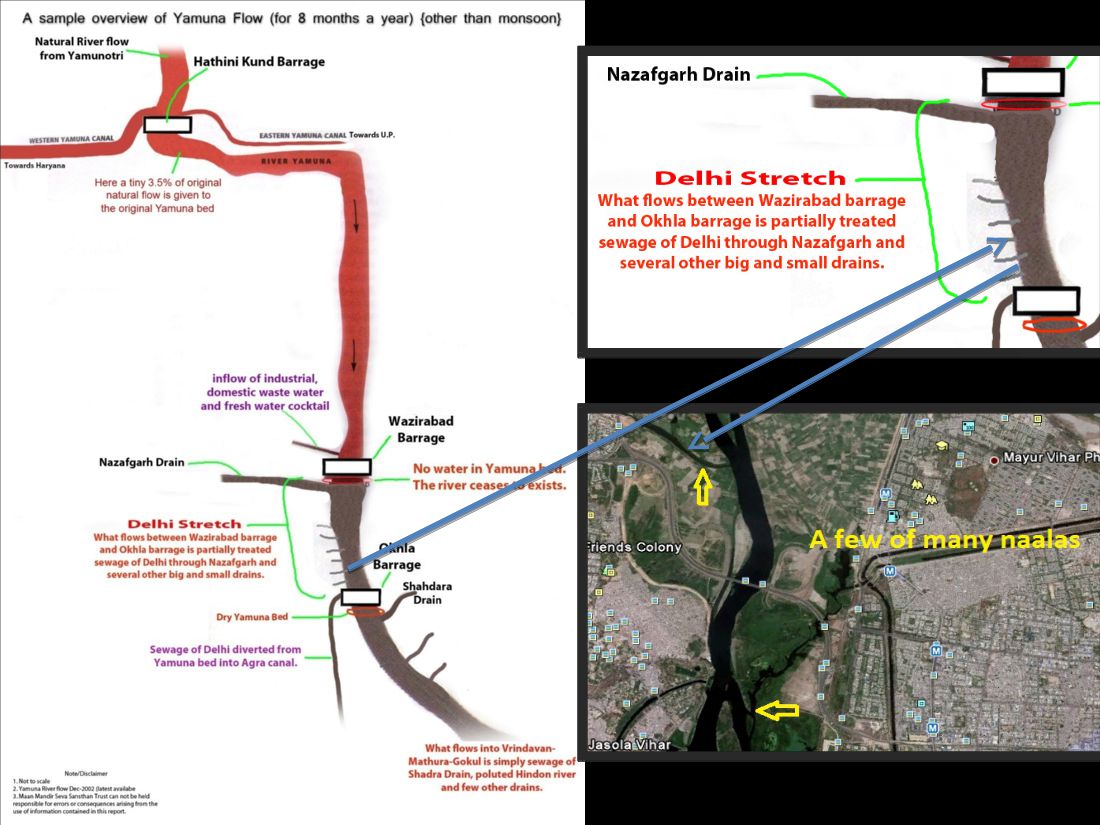 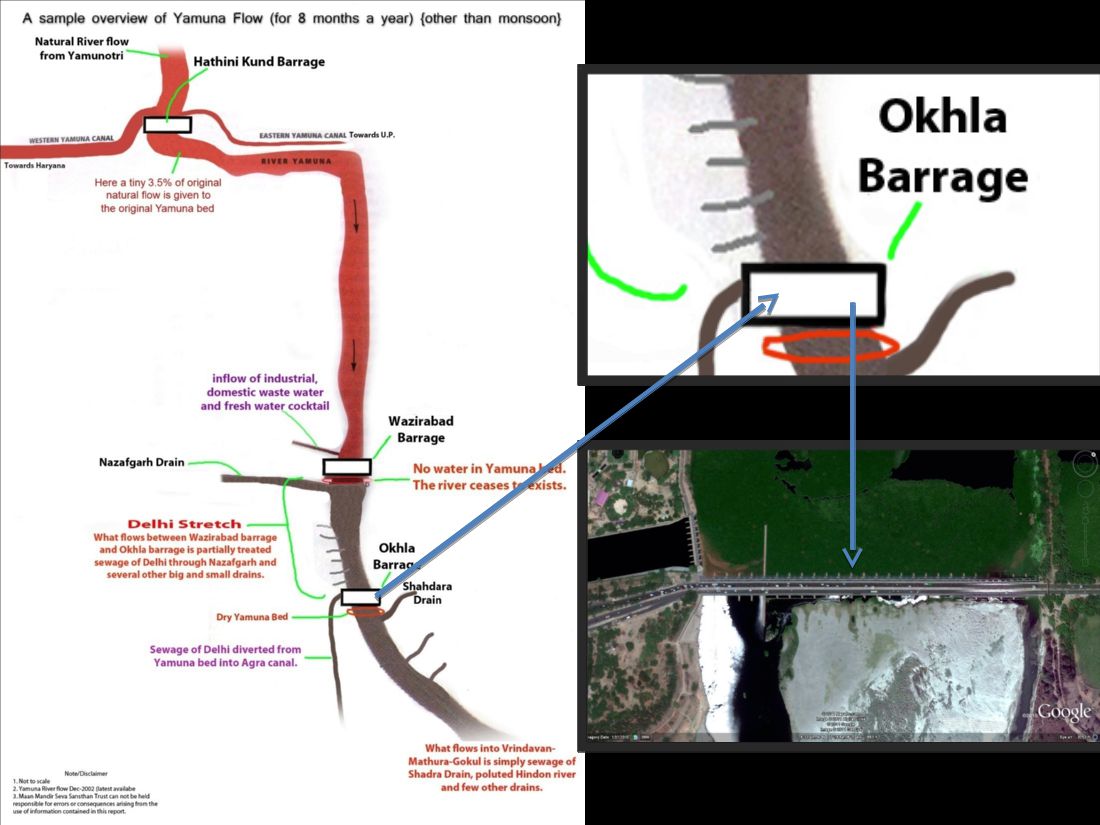 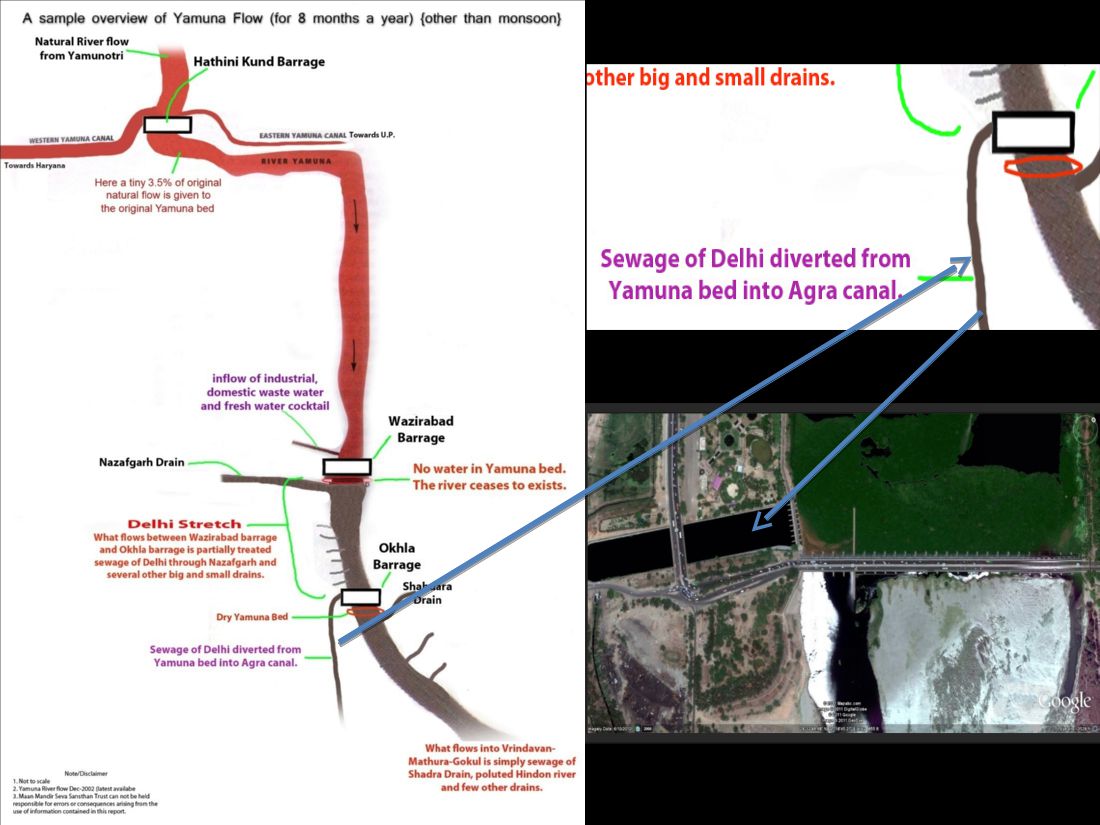 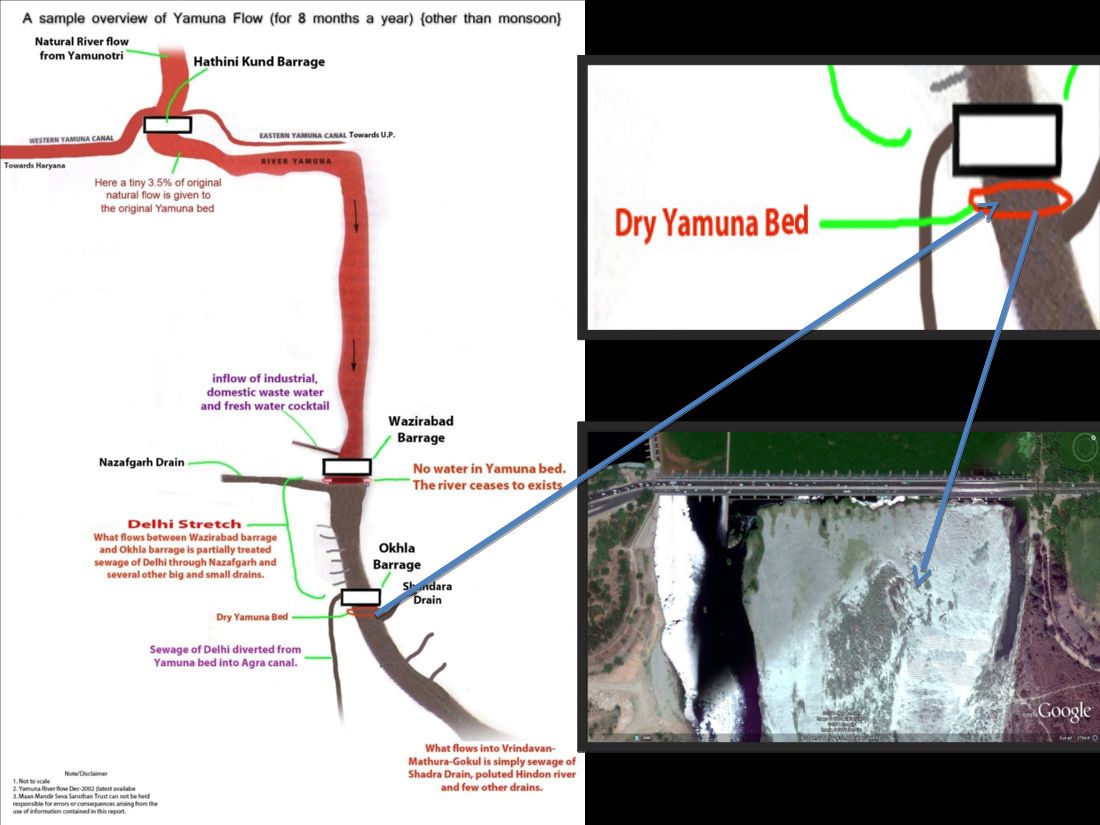 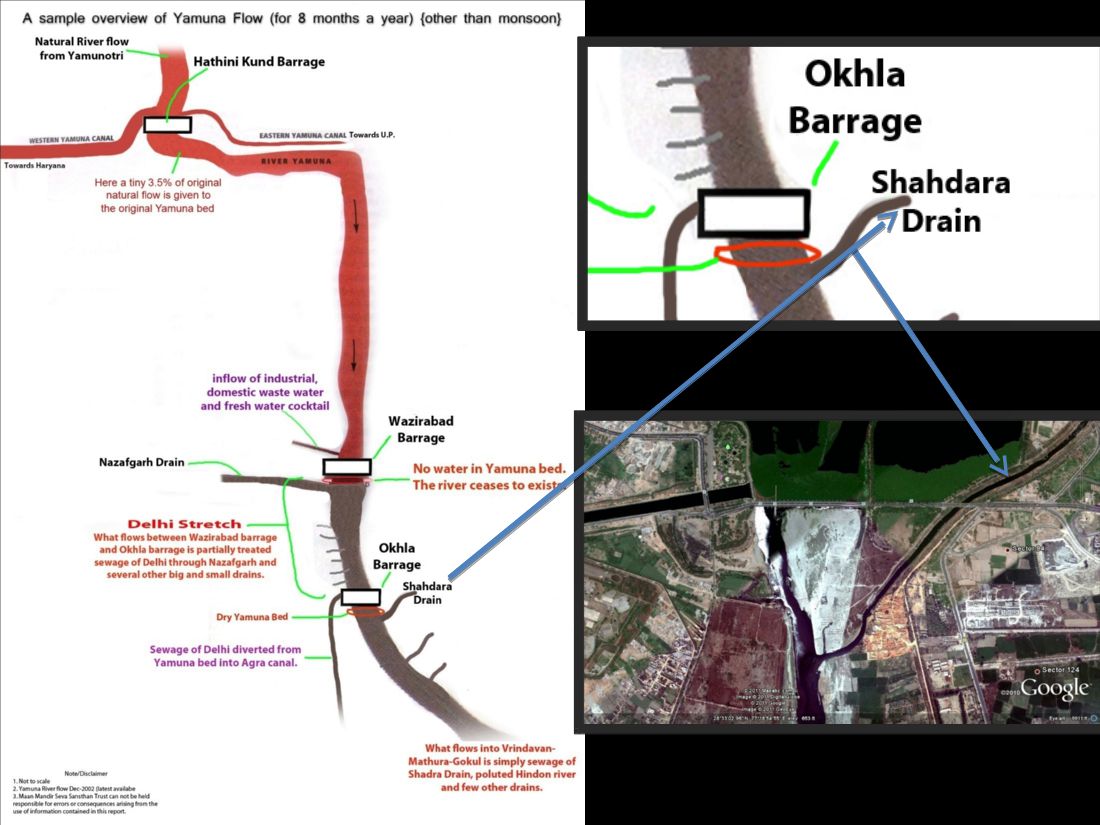 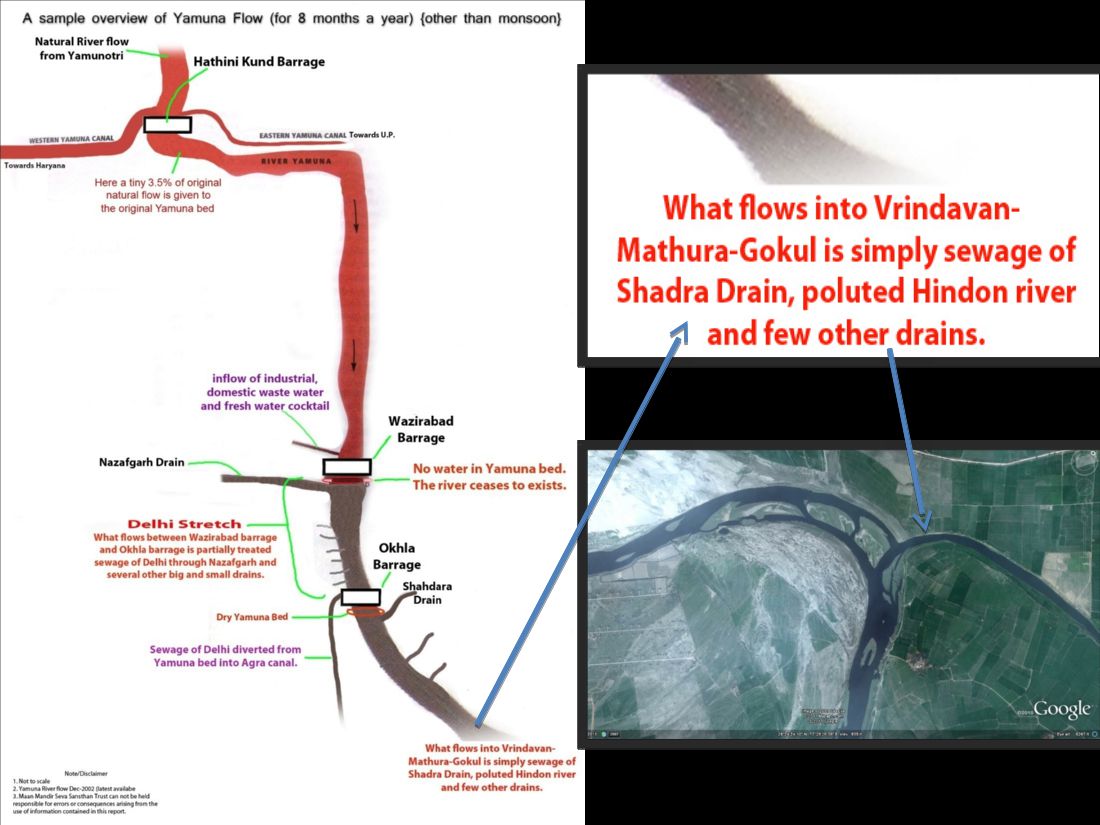 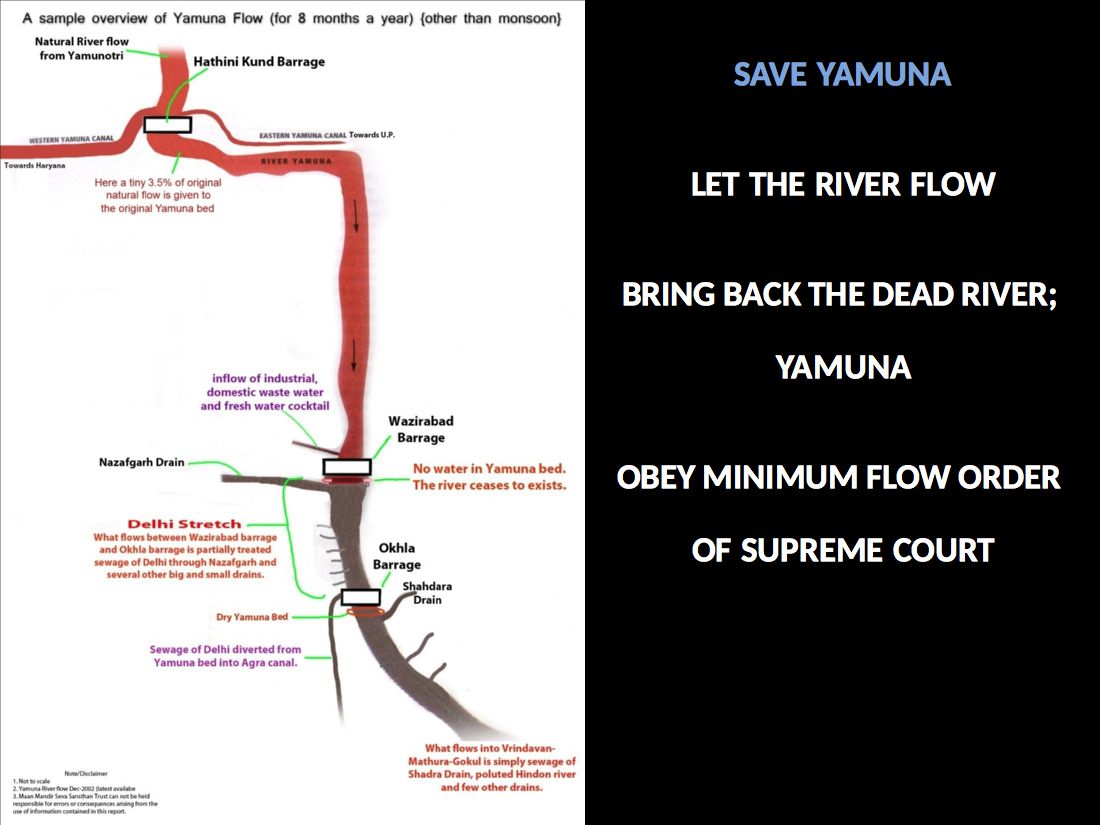 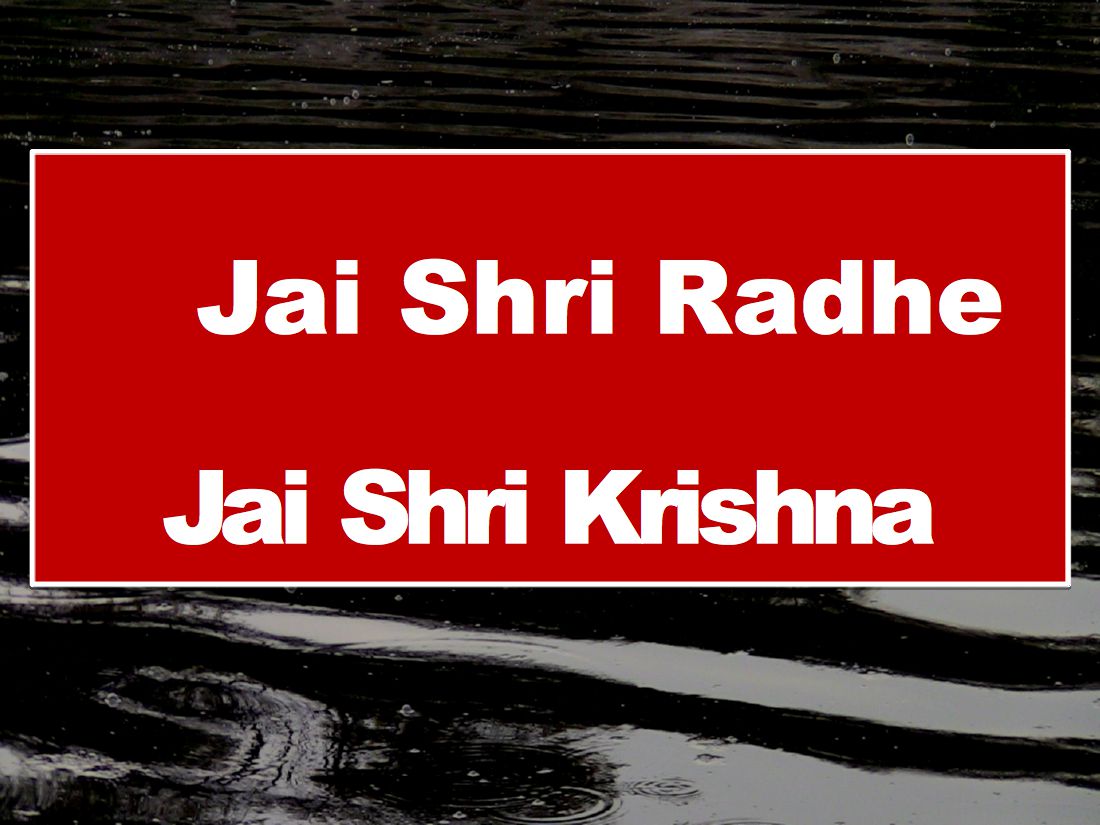 The River Yamuna….. Millions have depended on it since eternity, millions still do.

Rivers are natural resources to the world.

The river Yamuna is one of the two biggest rivers (other being Ganges) which flow through the world’s largest river basin- The Ganga river Basin. This basin area is approximately 1,086,000 square kilometers and has a population of 500 million. This area is also the land to one of the most ancient civilization known.

Religious / Spiritual Reverence: As part of a timeless civilization, the river Yamuna, other than being a traditional water resource, is also a cultural icon and is worshipped as a goddess in Indian Culture. A little inquiry into ancient Indian scriptures, rituals, art forms, traditional vocation, festivities or even the National Anthem shall vividly bring forward the esteem and glory that this Grand River holds, even in present times. In Hinduism, many begin their day by chanting the glories of River Yamuna and any prayer to Lord Almighty is considered incomplete without salutations to the river. The river Yamuna is considered to be a favorite of Lord Himself and in thousands of temples of North India; the deities are bathed daily with its waters. Many a temple towns are situated along its banks that have their characters based on the River and its religious tourism, the most famous being Vrindavan, Mathura, Agra and Gokul.

Officially Dead – Ironically, the river once pride of Indian civilization is now a dead river. Indian government’s own websites claim that there is not a drop of natural river water after it flows through Delhi. (WATER QUALITY STATUS OF YAMUNA RIVER (1999 – 2005) http://www.cpcb.nic.in/newitems/11.pdf.).The United Nations website has a report declaring the river a dead one. http://www.unhabitat.org/content.asp?typeid=19&catid=460&id=2170.Any individual in India shall tell you the same. Here is why.

Hathini Kund Stretch – At Hathini Kund Barrage, all most, 97% of natural fresh waters are taken away after a few kilometers of its birth.This withdrawal which is made in the name of irrigation, industrial development and drinking water is grossly mismanaged and reckless with little or no accountability. In most places, the river is a sudsy, listless morass of human, industrial and agricultural wastes, literally an open sewer. In some places, the Yamuna is now so heavily exploited that broad parts of riverbed lie naked and exposed to the sun for much of the year.

New Delhi Stretch – On its course, whatever little reaches New Delhi through various canals is soaked away by it down to the last drop.New Delhi marks the end of river. What flows beyond is simply partially treated sewage of Shahdra drain of Delhi and other smaller drains both domestic and industrial (not one drop of original fresh water from the river). The point where Shahdra drain meets River Yamuna, The Central Pollution Control Board of India in its January 2010 report gives an average of 51.3 BOD – Biological oxygen demand per liter (Max permissible for Bathing is 3) for 10 months with a high of 103 BOD. There is however NO Dissolved Oxygen at any given time (minimum should be 6 mgl). The total coli forms count at one point was 23,00,00,00,000 (max permissible is 5000).

Delhi sewage contributes 71 % of the pollution to River Yamuna while it only has 2% of the total length of 1376 km of the entire stretch of Yamuna (cpcb 1996). It is noteworthy that Delhi has 40 % of the total sewage treatment capacity of India with hardly 3 % of India’s population when India has a capacity to treat only 18.6 % of its sewage (cpcb 2006). Even the best of its available sewage treatment technologies or the ones being installed in the future do not have the capacity to bring down BOD (Biological Oxygen Demand- chief parameter of water quality) to 15 Mg/Ltr while India’s own standards have a benchmark of 3 Mg/Ltr.

Lack of Dilution Capacity – No amount of treatment can bring the qualities of Fresh natural water in a river. Even the much hyped & expensive interceptor sewerage project will not restore the river to class C—bathing quality (Biochemical oxygen demand (BOD)-3mg/l) waters as ordered by the Supreme Court of India. The project promises to reduce the BOD discharged by Najafgarh and Shahdara drains to about 12 mg/l that too under the condition that if and only if all planned interceptions take place. No projections for coli form counts are available. The report is also silent on the water quality parameters in the river Yamuna after the implementation of the project.

The river needs dilution capacity – minimum ecological flow at all costs. Any river does. Flows are needed for maintaining the river regime, making it possible for the river to purify itself, sustaining aquatic life and vegetation, recharging groundwater, Support livelihoods, facilitating navigation, preserving estuarine conditions, preventing the incursion of salinity, and enabling the river to play its role in the cultural and spiritual lives of people.” The latter appears to be a very important component in the Indian context.

Faith No More – Millions of religious/spiritual tourist visits 3 important temple towns on River Yamuna every year (Government figures – 11.3 millions/2010). The unofficial figures are much more. There are many more religiously significant towns on the river course whose figures are not accounted for. It is a shame that they are duped into bathing and drinking the filthiest of waters as none of them realize that it is only poisonous sewage. Their spiritual emotions and faith are being hoodwinked.

Government’s Apathy and its Ecological Costs

A river is a natural watercourse flowing towards an ocean, a lake, a sea, or another river. Killing it is a simple task.

Take away its waters and hence its flow.Pollute it (contaminate its natural freshness).­

The Indian Government has been so efficient to do this to Yamuna River.

The ecological impact has been immense-with the aquatic wildlife disappearing as fishes, turtles, alligators and others dependant on fresh river water dying in the toxic industrial pollutants and sewage.

World Heritage and one of the Seven Wonders of the World, Taj Mahal situated on its banks is under threat as conservationists fear a dry Yamuna river would weaken the wood-based foundation of the Taj Mahal, which requires moisture.

An article in the British medical journal The Lancet warned that bacteria in New Delhi drinking water carry a gene, NDM-1 (New Delhi metallobetalactamase), for an enzyme that conveys resistance to almost all known antibiotics. Resistant bacteria turned up “in public water used for drinking, washing and food preparation and also in pools and rivulets in heavily populated areas where children play,” according to lead author Tim Walsh of Cardiff University. An estimated 500,000 people in New Delhi now carry resistant bacteria, which have also appeared in Europe, North America and other parts of Asia. Medical authorities worry that the rapid spread of this form of resistance could imperil all kinds of routine medical procedures that depend on the ability to treat infections. “If resistance destroys that ability,” British health official David Livermore told The Wall Street Journal, “then the whole edifice of modern medicine crumbles. Ironically, many cities and towns downstream of Delhi source their drinking waters from the Yamuna River (simply sewage {not a drop from Original River} that flows to them in the guise of river water).